Look at me not posting for months! Even though I promised a Spectrum wrap-up post! Well, my seriously fraught move into DC has finally kinda-sorta resolved and now I have something awesome to talk about which does not involve terrible surprises!

And that is… this thing my friend Brandon made and released at SPX! (if you follow me on twitter, there was an indiegogo campaign for it). It’s a mini comic anthology collecting stories from a bunch of us artists who had transformative and/or embarrassing stories to relate about our teenage encounters with anime.

Who else contributed? Oh, just a bunch of seriously talented and internet-famous comic artists who make me feel all woobly to have work beside…

Somehow, my comic ended up being first.

I have a beautiful brown paper package tied up with string by Brandon himself, all full of copies. So if you’re jonesing for one of your own, go ahead and drop me a line! A whole world of teenage anime experiences, all for just $8 + shipping!

Tomorrow morning Evan and I hit the road for Kansas City, and Spectrum Fantastic Art Live!
I’ll try to blog while I’m there, but chances are that I’ll only have time for twitter. Trip synopsis when I get back!

In the meantime, for all of you I won’t be meeting there, have a tiny teaser of the last piece I managed to finish before packing.

Should you ever find yourself hoping for a copy of one of my pieces, either on your wall or on your apparel: you are in luck! Just amble right on over to my Society6 shop and have a look around.

And if the particular piece you want is not available in the format you need? Drop me a line! I’ll see if I can’t help you out there! 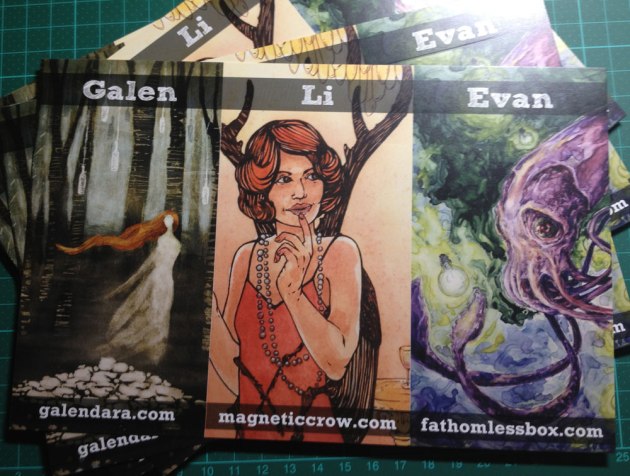 Just look at that beautiful stack! Booth 521 everybody, don’t forget! 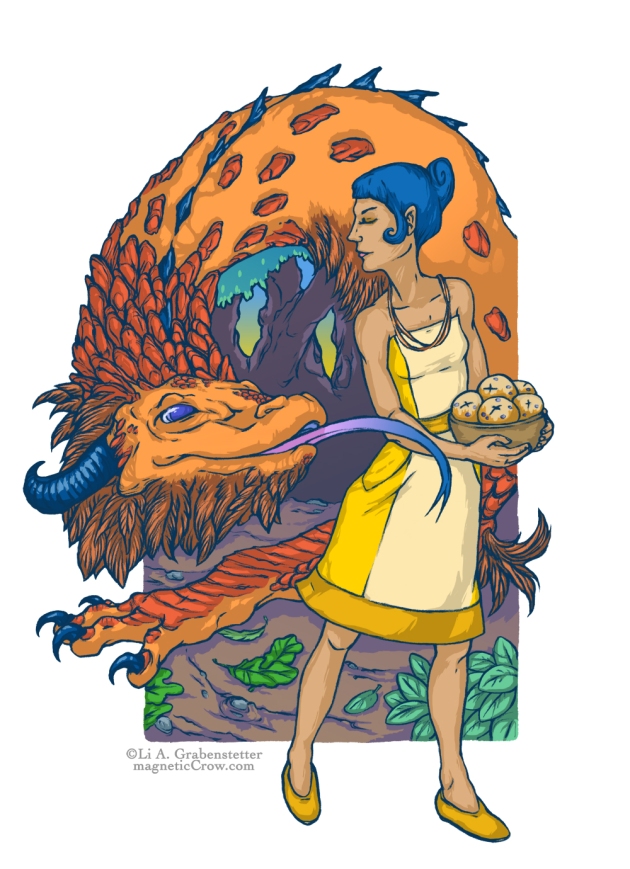 Giving digital a little more of a shot!
Thoughts? Opinions?

Just a reminder that in less than a month, I’ll be exhibiting at Spectrum Fantastic Art Live (number 2)! I’ll be sharing booth #521 with Evan Jensen and Galen Dara, and we’ll all have art prints and postcards and great big grins on our faces. 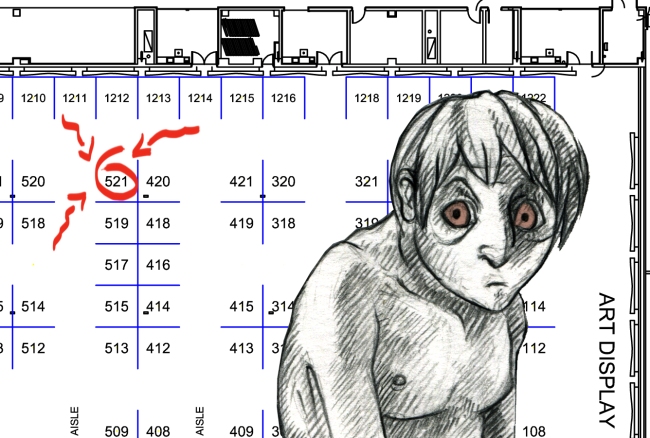 You should totally stop by and say hello! >:D 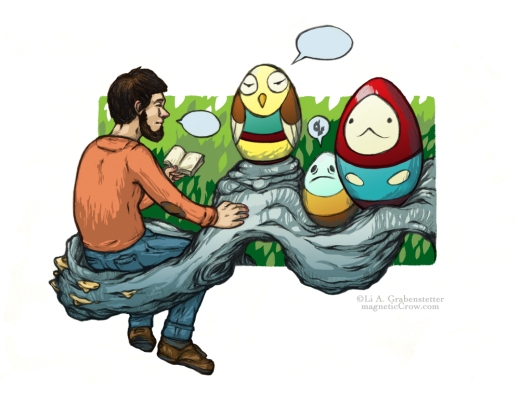 A frequent mental refrain of mine is “Dang, wouldn’t it be cheaper/less messy/take less space if I just worked digitally?” Typically this sentiment is quickly dashed when I actually give it a shot, throwing up my hands in frustration when I take a stab at coloring some meant-for-watercolor linework in photoshop and find myself frustrated with the results (except for that Fireside Magazine cover of mine, but special cases.)

WELL. I stuck with it this time. And I have to say, I’m rather fond of the result.

What do you think? I also played with using a textured paper I’d scanned as a background:

This is all rather new to me, and I’d really love some input! I’m personally leaning a little toward the paper background, but since I’m so used to traditional painting/printmaking I’m wondering if I’m just using it as a crutch to make myself more comfortable.

(And if you think that looks like a certain Evan we all know sitting in the tree, you’re right. He took one look at my original thumbnail, and declared that he wanted to be in it:

Evan, you have odd tastes.)

I started this a few months ago (haha, longer ago than I last posted here actually…) and it just got snowballed under everything else I was up to.

It’s my contribution to the ‘cute girl with dragon’ trope in fantasy illustration, that sort of seems like a requirement anymore…

Water color, and ink (experimentally, I’ve been doing a lot of experimenting lately) applied with a brush. I have mixed feelings about it, but I’d love to hear input from others! What do you think?

Have you seen this article? It’s by an English bestselling children’s author, Terry Deary, claiming that libraries are obsolete and a waste of taxpayer money. Further, he claims, every time a book is checked out of the library it’s costing the author a potential sale. He blames the closing of bookstores on libraries, and asserts that because of “compulsory schooling”, the goal of providing “the impoverished access to literature” has been achieved and therefore libraries are nothing but a drain on taxpayers and publishers. He makes a wholeheartedly absurd comparison to the car industry (having never, apparently, heard of car rental or used car sales.)

What is this I don’t even.

Confusingly, in the past he has also said of public schools that “I’ve no interest in schools. They have no relevance in the 21st century. They were a Victorian idea to get kids off the street.” Which sounds pretty similar to his indictment of libraries, frankly. Apparently nothing at all good came from the Victorian era, in Mr. Deary’s estimation. While reform of schools is certainly an important topic, sweeping opposition to all forms of publicly available education seem more pre-Victorian than modern to me.

So Mr. Deary looks at every time a book is checked out (and for him that’s more than 500,000 times in the past two years, he’s a popular author) and sees a lost sale. He’s ignoring the fact that not everyone can afford every book they want access to. And what options are left to those who can’t pay for the books they need? Used books are great, and cheap, but they no doubt don’t satisfy Mr.Deary because he’s not getting paid for that sale. Not even as much as the library is paying him. As is the case when you borrow a book from a friend. That leaves shoplifting, ebook piracy, or not reading. None of those options benefits anyone at all.

I am lucky enough to be able to afford about 5 books a month. But I read more than 80 a year. These numbers do not match up.

What libraries do is create readers. People who do not love reading do not buy books. You can’t expect someone to help prop up an industry they have no stake in. Telling someone who has little to no interest in video games that they’re responsible for killing the video game industry because they bought a single used copy of ‘The Sims’ would be pretty nonsensical. You can’t sell to people outside of your market, they’re not buying.

But libraries help create that market. Through author events, through librarian recommendations, through literacy programs for adults, and just through the overwhelming crowd of free books available without the supervision of a teacher. Visitors can read whatever they want without judgement, and find whatever genre it is that really lights a fire for you. Books need to be sold a little harder than they were once upon a time, they have more competition now, and libraries do all that hard work. Those brick-and-mortar bookstores that keep closing? I miss them too. But because of companies like Amazon bullying publishers so that it can massively undercut prices and using those bookstores as unpaid-for showrooms for their product, those bookstores are having a hard time. If they’re gone someday, the library will be the only showroom left.

Another bestselling English author had something to say about the subject of closing libraries not so long ago:

The book is second only to the wheel as the best piece of technology human beings have ever invented. A book symbolises the whole intellectual history of mankind; it’s the greatest weapon ever devised in the war against stupidity. Beware of anyone who tries to make books harder to get at. And that is exactly what these closures are going to do – oh, not intentionally, except in a few cases; very few people are stupid intentionally; but that will be the effect. Books will be harder to get at. Stupidity will gain a little ground.

I think Mr. Pullman has the right of it.

New issue of the lusciously frightening Innsmouth Magazine, everyone! And not only that, but the cover illustration is one of mine! Go treat yourself to a copy of this eminently spine-crawling publication by Innsmouth Free Press.