One of the dangers of setting your own schedule: it’s really easy to allow weeks to slip by without noticing. I’ve been pretty loose with scheduling lately, as a follow-up to a contract that had me pretty rigidly locked in for a few weeks, and it has not done good things for my timeliness.

For one, I forgot to blog a mention about my guest post over at Inkpunks, which outlines some basics of website design (applicable even to lazy folks like me who rely upon blogs and premade themes to do the bulk of our work).

Today Evan’s guest post went live on Inkpunks, in which he talks about his struggles in finding a comfortable space he can feel creative in, even in cramped living situations.

And this past weekend, my little brother graduated from JMU! In an outdoor stadium, in the pouring rain! Congrats Warren! I’m so proud of you. I hope your celebratory 3 day, 50-mile canoe and camping trip in the pouring rain still manages to be extremely enjoyable despite everything.

And just for fun, something new from my sketchbook: 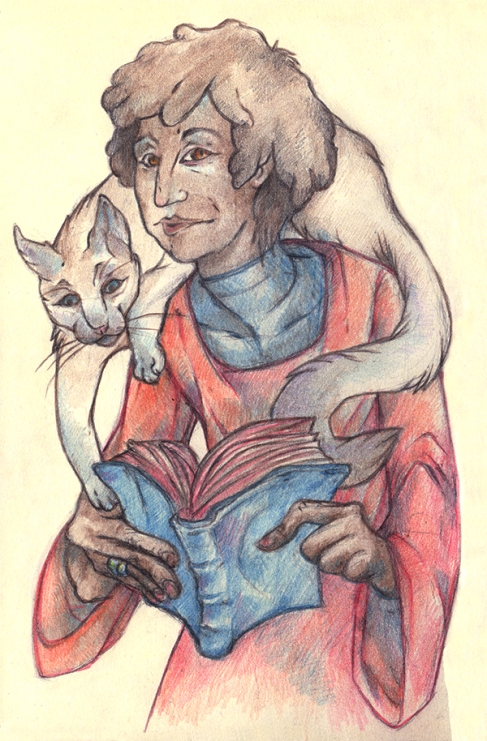 And I’m participating in Artomatic Frederick which begins at the end of next month. And I’m possibly flying to Seattle for a week at the beginning of September, due to one of the aforementioned potential clients. :| Sadly, I can’t promise you’ll hear from me much during the next several months. Wish me luck.

* This is Evan and I’s collaborative press/studio. We’re finally getting it together!

EAL of the blog Assembling Imaginations has passed the Liebster blog award on to me! Besides being extremely flattered, I think this is an awesome idea. Sort of a like a chain letter, but the purpose is encouraging recognition of less-visited blogs.

EAL’s summary of the rules:

The award is given to bloggers with fewer than 200 followers, and the rules are:

1. Thank the giver and link back to the blogger who gave it to you.
2. Reveal your top 5 picks and let them know by leaving a comment on their blog.
3. Copy and paste the award on your blog.
4. Have faith that your followers will spread the love to other bloggers.
5. And most of all – have bloggity-blog fun!

I did some Googling, and the rules seem to vary (300 followers or less or 200, 3 or 5 blogs) but I wasn’t able to figure out who originated the award. Great idea, whoever it was!

Except on blogs where follower count is visible, I’m not positive how to tell a person’s follower count without ruining the surprise. So I’m guessing! Apologies if I underestimate anyone’s readership, the intentions are good.

1. Kit Seaton of A Corrupted Endeavor — A favorite artist and a friend. She certainly has a readership, but as sketchblogs seem to be losing popularity I worry that she doesn’t have enough. Go marinate in her awesome!

2. FairyHedgehog is a writer, and a rambler, and a damn nice person on the internets. True story: I found her originally by googling folklore about fairy hedgehogs, then stayed for the cool stuff she says. She’s progressive and super inclusive and just about the most terrific. Absolutely take a look at her recommended blogs list, too.

3. Michelle Farran of There is an Octopus in my Handbag (aka Why Mice Sing). Someone who found me randomly through the internet. She is an artist and a geologist and everything she posts is beautiful. She also has a thing for cephalopods, which is why her second blog Vulgar Army is about octopi in political cartoons.

4. Evan Jensen of Squirrels on Tap (or Evan’s skethbloggery, or whatever he’s calling it these days). Nepotism? Perhaps. But I wouldn’t have married the guy if he wasn’t strange and creative and ridiculously talented. Mutual respect is important in any relationship. So if you like steampunk, hedgehogs, steampunk hedgehogs and bold watercolors of strange creatures, check his blog out too.

5. Allyson Rudolph, who I met through 826DC. She herself is a feminist, writer, nerd, and fellow DC-ite (thought sadly not for much longer). Her blog is filled with thoughtful ruminations on books she’d read (she has a really terrific reading list), politics, life, living in DC, cats, and more. The blog theme feels mellow, but her insights are sharp. Go read them.

There are so many more that come to mind now… I’m going to have to do some more link boosting in the near future. In the meantime, I hope you take a few minutes to check these out! You may find something you like.

So I think my art crisis is over. I’m back to painting in about the same way I did originally (save for the fact that I ink last, rather than first) and I no longer feel quite as convinced that my color work is terrible. I do think that the experimentation was really useful, but it’s nice not to feel so panicky whenever I think about making work for someone. Expect more of that sort of thing next time I start feeling insecure about my art (which knowing me will probably be next week). 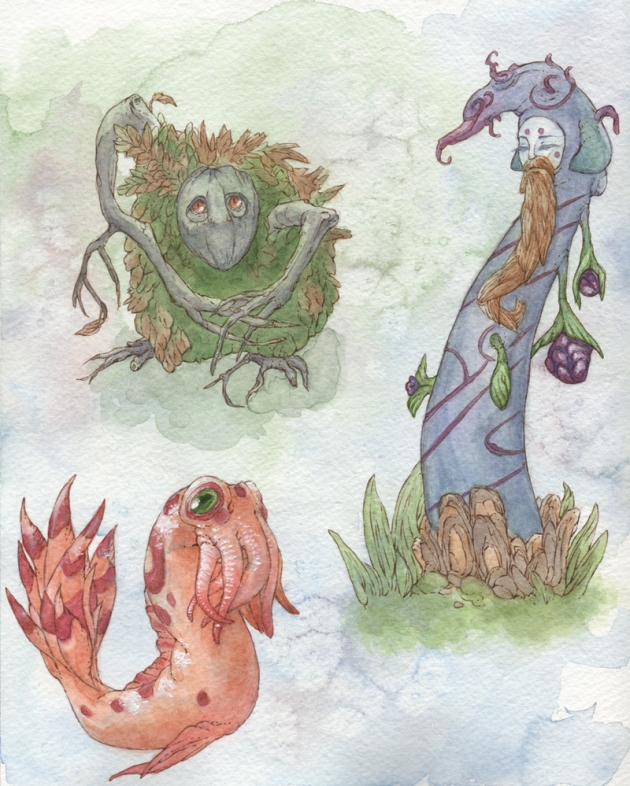 I tried using gouache for the first time in this one! And I also used salt successfully for the first time! So I guess I’m not actually done experimenting, but at least it’s more typical to my work. Ink, I missed you. I think I’d like to practice painting slimy things some more.

I was having an extremely strong urge to draw pokémon fanart, which I channeled into this instead. So I guess this is what pokémon would look like if I’d been the one to design them. This must be your three starter options. Which would you choose?

I forgot to get a scan of the initial pencil lines, but I do have an ink-less and gouache-less stage below the cut, if you’re interested.

END_OF_DOCUMENT_TOKEN_TO_BE_REPLACED 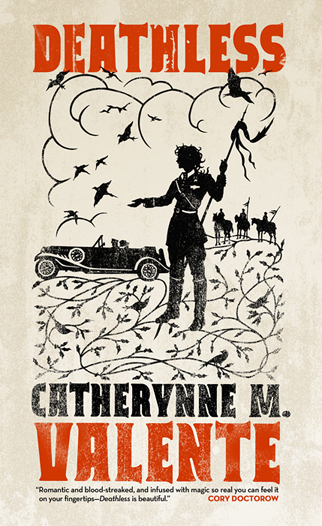 I enjoy many things. A clear sunny day spent sitting under a tree with my sketchbook, a brisk walk  on a rainy and blustery afternoon. Birds chirping and  flittering about me as I stand still in the forest. A good hot mug of chocolate. And books, and art, and beautifully shot, convoluted movies with fantasy deep in their plots.

Beautiful weather and birds aside, much of what I love has a person, or people, to thank for it. And because of the internet, I’m closer to those people than ever I was in my childhood. I can read an author’s blog and learn how she sat in a coffee shop for hours, years, drinking hot chai and typing long fluid sentences. I can follow an art director’s twitter stream and watch the development of a cover from concept to print. I can visit an artist’s portfolio site and see what work inspired and was inspired by the cover I enjoy so much. If ever I feel threatened by a disconnect between myself and the world of wonders I consume, I can go online and immediately discover myself a part of a community of writers, artists, readers, creators. It is a beautiful, exhilarating feeling. It reminds me of why it’s such a lucky thing to be human in this century — our society is huge.

END_OF_DOCUMENT_TOKEN_TO_BE_REPLACED

It rained yesterday, through the morning. At some points, it rained pretty hard. So when I went downtown today, this is what I encountered. 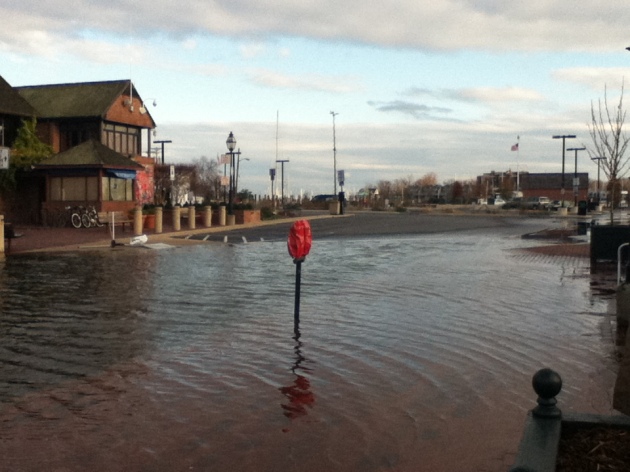 Yeah. Annapolis has the worst drainage of any port city I’ve ever been to. There were sandbags in front of businesses, and some stores were downright closed due to flooding. The dock portion of town was blocked off with police vehicles and caution tape. More photos after the cut.

END_OF_DOCUMENT_TOKEN_TO_BE_REPLACED

I have been making much art in the past week two weeks, since I last updated my blog. Oh how I wince to say that… two weeks… there’s really no excuse but that I’ve been overwhelmed, and frightened to post anything other than art-related words on here. That will change.

There hasn’t been much sleep, in all that time. A lot of painting, a lot of touching and retouching in photoshop. Some running around to try and find somewhere with a decent large scale scanner, whose process wouldn’t entirely wash out all the delicate blues in the background of my painting (I didn’t really find it, and was forced to fudge things slightly). There was more carving, and a long string of prints resulting from it. There was far too much time spent sitting in a chair, staring at InDesign.

Tomorrow night Evan and I begin work on our contributions to the mural over at 826DC. The background was gorgeously painted by others, but they ran out of time and now it’s ours to try and paint some of our creatures into it before the donor opening on Friday. As we’re working full days at the design job right now, we’ll have to catch a few hours of painting after work each day. Unless things get a lot less busy, we won’t be able to take a full day off to paint; meaning short stints of work and not very much sleep.

We’re still wrestling with whether to move into DC or move out to Seattle. Regardless, we need to be somewhere closer to the action. The length of our commute is ridiculous, and tends to leave us with a choice between decent amounts of sleep or any working time in the evenings at all. That this design job could be very easily telecommutable, should our boss allow it, doesn’t help our feelings about it much.

I haven’t found the time to scan the finished woodblock print yet, though when I do it goes up here. Likewise, I’m holding off on posting the final pieces for Cat Valente until she gets the website up and running. When that happens I’ll post the entire string of WIPs, plus final, for each of them. Quite buzzing with excitement over that. And I’m pulling out my Sketchbook Project sketchbook right now! I’m picking up a pencil! I am going to begin working in it tonight, and posting the pages here as I go along.

So those are some of the things to look forward to, as a reader (willing or unwilling) of this, my blog. That, and the 826 images when I’m finally given permission to release them to the public! I am sitting on art and it is making me antsy. Time to make some I can hand out right away.