I actually remembered to document my stages on a watercolor! A small watercolor sketch, but it’s something.

Those who follow me on twitter might recall this one! I was extremely unhappy with it for a while, though I’ve since grown a little more at ease. After the jump, I’ll talk a little about the process that goes into watercolors like these.

I’m going to begin with the completed ink drawing. If you want to know what it looked like before this, imagine a next of messy grey lines slowly resolving into something resembling this with the liberal use of an eraser.

So that’s that. Now, on a larger piece I’d be taping it down to a board before the next step, but this piece is only 4 x 6″ and I didn’t intend to get as carried away as I did. I left it in the watercolor pad it was bound to, and it went ahead and warped like crazy as a result. This can be fixed with a spritz of water to the back and some flattening, however, so I just continue to use my discretion. There’s really nowhere to put tape on this one. 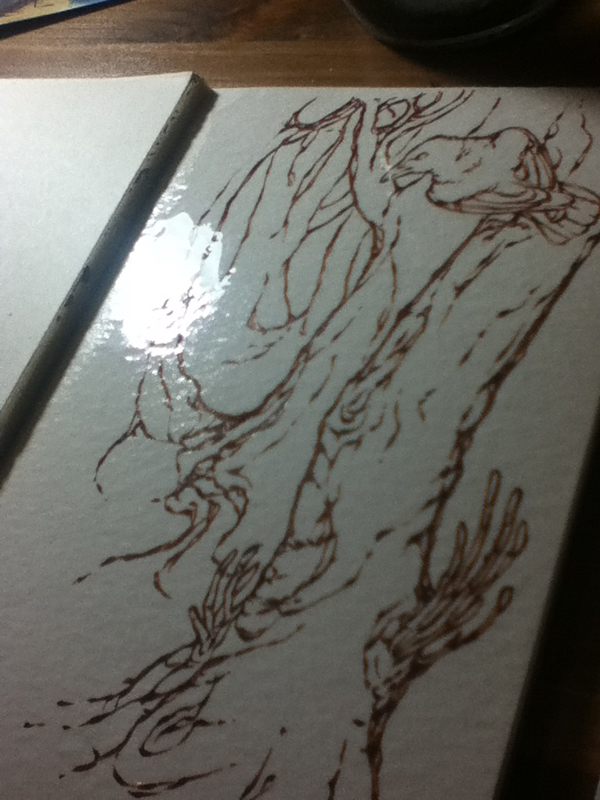 I wanted an atmospheric image, so I put a whole ton of water down for it. If I’d been going for something more precise or with a lot of white space, I’d be less liberal.

Next thing is to throw in some of the basic colors. 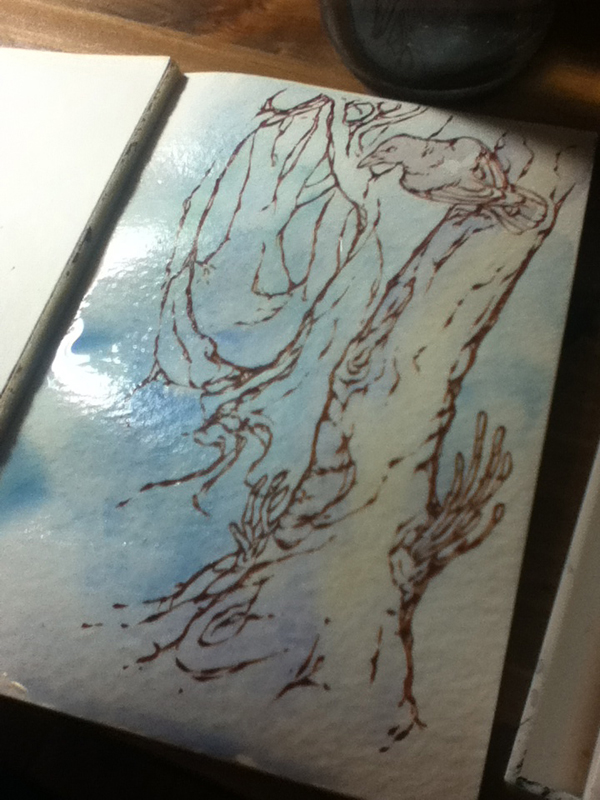 And then I let it dry fully. Which is painfully slow. Some watercolorists use a hairdryer to speed up the process, but I like the surprises that can come out of leaving those little pools of color to dry up on their own. If I’d wanted to mess with adding sea salt or rubbing alcohol for texture, I would have done it in between these two stages.

The next few stages are pretty similar. I just added layer after layer of color, trying to pop out the warm tones in that tree and push back the forest with some cool tones. My frustration over this piece was with how ineffective I felt this was – I probably should have gone more all-out with the second layer of color. There’s a saturation point with watercolor, where the paper really won’t take any more pigment. You want to reach your darkest darks before that happens. If you’re too timid, like I was here, you’ll never really achieve them. Something I’m working on.

Then I went back in with my pen and ink (Dr. PH Martin’s Bombay Van Dyke Brown, if you’re wondering) and added more detail. Sometimes you fail at pushing things around with color, and then line detail can be the fallback. Notice how often I end up adding a lot of detail to my linework (heh).

And here’s the final again, for continuity’s sake.

There you have it! Everyone works differently, so I wouldn’t necessarily suggest copying my slapdash method for yourself. This is just how things fall out when I get to working. I’m precise when it comes to linework, but hopelessly impatient with paint.

5 thoughts on “Process, on a small watercolor”