Illustration Friday got skipped due to the swelling tide of deadlines I’ve piled onto myself. I can’t promise IF will actually get done until these are cleared away, sadly. For some reason, commissions and design contracts seem to always hit me at the same time. At least one of these commissions is paying me! As well as being awesome beyond believing! Though really, given that one of my unpaid commissions is 826… I really can’t complain here.

Now for the Monday monster.

This is the Chimney fly, an unselfconscious little bug with a knack for picking the most inconvenient spots to roost. It eats nearly anything, from jam sandwiches to old candy wrappers; then incinerates its meals within a stone-clad, white-hot belly. Smoke pours continuously from its various portals, a pungent melange of digestion. This particular Chimney fly is experimenting with another variety of smoke, hoping the odor will cover its own, which it has been told is unbearably offensive. However, smoking will not agree with its constitution, and it will consider eating only flowers in the future.

Below the fold: a moleskine sketchdump!

House on the moon

This sketch has been kicking around my sketchbook for a while. I keep meaning to color it, watercolor works alright in moleskine sketchbooks if you take a light had with it and don’t mind a beaded texture in places.

I like the concept, a stilted house on a moon-lake shaded by a tree. I may use it again somewhere.

A lot of the time, when I’m sitting somewhere and doodling in a sketchbook, I have no idea what’s guiding my pen. This was a very stream of consciousness page. Another one I was planning on coloring…

The last one is the beginning of a sketch based on a dream I had. In it, a woman and her son were visiting the woman’s great-uncle. He was a field scientist, working in a base camp at the edge of “The great fungal forest” on the Moon. You can see the Earth hovering there in the sky on the right. The sky was lurid orange, the mushrooms a flat brownish violet. The great-uncle took the two of them on a tour of the forest, ultimately getting them all slightly lost. They may have wandered into a temporal anomaly that send them back 1000 years. 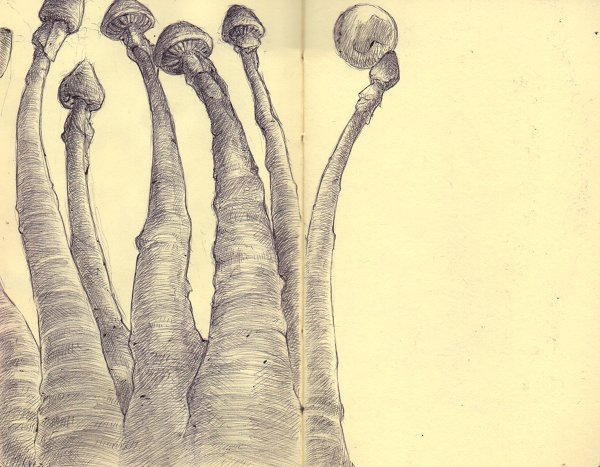